The 2019-20 intercollegiate athletics season ended abruptly when student-athletes were sent home due to the COVID-19 pandemic, and coaches were left wondering what would happen to their programs. Even though schools eventually decided to either cancel fall sports or postpone them until the spring, student-athletes were still welcomed back to campuses so they could resume organized training this fall. 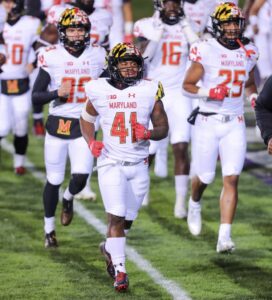 The University of Maryland’s Football Team

The only sport competing this fall has been Football Bowl Subdivision (FBS)-level football with all the “Power 5” conferences (Atlantic Coast, Big Ten, Big 12, Pac-12 and Southeastern) participating. Division I men’s and women’s basketball commenced on Nov. 25 with teams playing five or fewer non-conference games and with an early start to conference season.

“We did education around the return,” says Darryl Conway, senior associate athletic director and chief health & welfare officer at the University of Michigan. “It started with the coaches, making sure they were involved in the process. Then a lot of Zoom calls with the student-athletes to understand what was being done. Then, we had Zoom calls with each team’s parents … and gave them the opportunity to ask questions and really understand what the protocols are.”

In addition to guidelines from the NCAA and the Big Ten, Michigan developed some of its own safety protocols with campus health services, faculty members in the sciences, athletic trainers and people in facilities management.

The first group of Michigan student-athletes returned to campus on June 15. From there, it was a gradual return. Football and men’s and women’s basketball began training in June too, and starting July 6, the Olympic sports started returning. By the last week of August, approximately 920 student-athletes had returned. A few opted out of the fall semester.

Michigan has a “virtual first” perspective, meaning if something can be done virtually, it’s done online. Locker rooms use a staggered approach and the weight rooms and meeting rooms have reduced capacity.

“We are not doing any sit-down team meals or sit-down fueling stations; we’ve … gone to 100% takeout,” says Conway.

Mike Farrelly, the acting head men’s basketball coach at Hofstra University in Long Island, New York, says the players were impacted by not only having their 2019-20 season end right after they won the Colonial Athletic Association Championship and a trip to the NCAA Tournament ­— but they also had to spend months without access to organized basketball, so they needed to ease back into training and practice when they returned to campus in August. 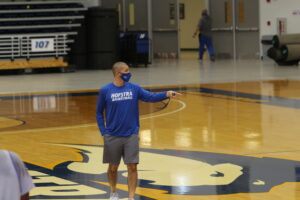 Their return was carefully constructed and the “Return to Play” protocol was coordinated with Northwell Health. The athletic trainer, strength coach and Farrelly worked as a team to navigate training while adhering to the protocols. Players began with strength and conditioning, for which everyone wore masks. Basketball workouts began with one player at a time. They slowly grew the group until reaching full-team, on-court practice.

“Certainly, [it was] a challenge because as a coach you want to push forward … but it was so well planned by our athletic administration,” says Farrelly, who wears a mask to all practices.

At the University of Maryland, the football team returned to campus on June 8. All student-athletes were offered the opportunity to opt out and some did with their scholarships still being honored, says Dr. Yvette Rooks, head team physician and assistant director in the University Health Center.

Maryland has a campus policy that all coaches, faculty and staff must have a COVID-19 test once a month and negative tests were required before they resumed their on-campus duties. Coaches and staff all wear masks. Student-athletes may remove their masks during practice but not elsewhere. Hand sanitizer is everywhere.

There are approximately 530 student-athletes on campus. According to news reports, there were more than 100 positive COVID-19 tests over the time student-athletes returned to campus from June to early September. As per Centers for Disease Control and Prevention (CDC) directives, anyone who tested positive went through 10 days of isolation.

When someone comes out of isolation, Rooks says they go through a rigorous cardiovascular workup: EKG, cardiac biomarkers, an echocardiogram, a cardiac MRI, examination by a cardiologist and final clearance from Rooks before returning to play. Since the end of September, only one student-athlete has tested positive.

Located in Queens, New York, student-athletes and coaches returned to St. John’s University understanding their responsibilities to keep themselves and each other safe and healthy, says Mike Cragg, St. John’s director of athletics. There is no football team, so the first to return were the basketball players, who started coming back in late July.

“There’s a high level of awareness because we’re right in the middle of it from day one,” says Cragg.

At the University of Maryland, the number of weekly tests for student-athletes varies depending on whether their sport is currently competing or about to compete.

“As of Sept. 30, we are doing antigen tests for the football team six days a week,” says Rooks. “We started the six days a week antigen testing for men’s and women’s basketball. The remainder of our student-athletes are being tested once a week, but as they approach their seasons, they will also have an increased frequency in testing.”

Rooks regularly makes recommendations to the coaches and praises their adherence to her directions. This includes holding the student-athletes responsible for their own health and welfare and that of their teammates.

“We’ve worked to reduce the ‘tough it out’ culture if you’re sick,” says Conway.

Michigan football players are tested six times a week. There have been some positive tests. When that happens, the school follows CDC guidelines as well. After 10 days of isolation, student-athletes also go through a return to play protocol, which includes extensive cardiac testing and a seven-day progression for return to full participation.

With football season now in progress, Conway says, “We’ve done more virtual meetings in hotels. They get tested the day before the game, the day of the game.”

Before a football game, anyone involved in operations must go through antigen testing the day before and the day of the game. Anyone who tests positive is not allowed to participate. Any player who tests positive the morning of a game cannot compete. As of now, the Big Ten is limiting fan attendance at football games to close relatives, and each person who enters the stadium must answer a questionnaire.

“Nothing is fool proof, but I think we’ve thought through this,” says Rooks. “The same will be true for basketball.”

Rooks says the sports psychologists on the athletics department staff have been integrally involved in supporting the student-athletes as they navigate these unprecedented times.

“We know student-athletes and students in general are undergoing more stresses in the absence of college life,” Rooks says.

Both the athletic department at St. John’s and the university have mental health services available. “Our coaches and staff are extremely in tune to look for situations, and we’ve had a few,” says Cragg. 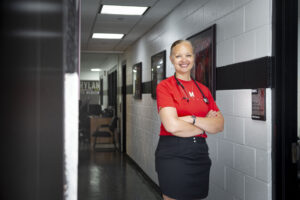 Although mental health support services have long been available for student-athletes, it has generally been left to the athletes to seek it out. Due to the pandemic and subsequent isolation and frustration that many student-athletes felt in the months they were off campus, mental health check-ins have become standard procedure. Now that student-athletes are back on campus, coaches make concerted efforts to remove any stigma associated with it.

“We’re using our resources on campus within our athletic department, but what I think we’re also doing within our team is creating a platform of conversation and allowing our athletes to be heard,” says Megan Duffy, head women’s basketball coach at Marquette University. “Sports, in some ways, you have to be the tough guy and you have to hide some things that are going on.

“We’ve kind of approached it the other way of being able … to discuss, ‘I’m having a bad day’ or ‘We’re in a really tough situation.’”

Melanie Moore, head women’s basketball coach at Xavier University, says the mental health and well-being of the players are a priority for her and her staff. There have been team Zoom sessions with counselors to discuss strategies for turning a bad day around as well as informative sessions about available resources.

“We’re utilizing the counseling center and making sure the [student-athletes] are aware of what is available on our campus, so if they don’t feel comfortable having those conversations with our coaching staff or a teammate, they have somebody they can go to,” Moore says.

Farrelly says having NBA players speaking out on their mental health issues during the pandemic has made student-athletes feel much more comfortable with asking for help.

“Once they hear that, it does become a little bit more acceptable for them to do that,” Farrelly says. “So much of this comes back to the coaching staff and the people around them every day. [We do] daily check-ins, even if we’re not in practice. Our most important job with these student-athletes is their well-being.”

This article originally appeared in the November 26, 2020 edition of Diverse. You can find it here.

Former Tennessee Titans star Eddie George has been named Tennessee State’s head football coach, ESPN reported.  Eddie George George, 47, starred as a running back for the Tennessee Titans from 1996 to 2003. George does not have much coaching experience but he has served as a mentor to multiple Titans players, particularly Derrick Henry. George […]

The Arthur Ashe Jr. Sports Scholar award is a part of Diverse‘s quarter-century legacy of recognizing outstanding minority young men and women who have distinguished themselves in their academic and athletic pursuits. In addition to their athletic ability, the students named 2021 Arthur Ashe Jr. Sports Scholars are students of color who have maintained a cumulative […]