In a letter written to the University of Kentucky president in July, faculty members at the school had outlined multiple steps to advance the school toward racial equity, including the removal of the name of former UK head basketball coach Adolph Rupp from the school’s arena.

About a month later, John Calipari, UK’s head men’s basketball coach has now responded, saying he is “all ears” as to why Rupp’s name is problematic, reports WHAS-TV. 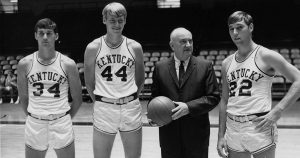 In his 42-year tenure, Rupp led the Kentucky team to four national championships, but his alleged use of derogatory language and discrimination toward Black players has tainted public perception of him in recent years.

“The Adolph Rupp name has come to stand for racism and exclusion in UK athletics and alienates Black students, fans, and attendees,” the faculty said, adding that, with the arena undergoing a $275 million renovation, it would be an opportune time “to change the name to a far more inclusive one, such as Wildcat Arena.”

That Rupp’s name stands for racism is somewhat disputed, reported The Washington Post in July. The Post noted that conflicting stories have been told of Rupp over the years.

“I spent time with him. I never saw any sign from him or heard anything from him that indicated to me that he was a racist or a bigot in any way,” NBA coach Red Auerbach told author John Feinstein in his 2005 book, Let Me Tell You a Story: A Lifetime in the Game.

Meanwhile, in his 2019 biography Adolph Rupp and the Rise of Kentucky Basketball, James Duane Bolin recounts multiple instances in which Rupp allegedly discriminated and used derogatory words against Black players.

According to WHAS-TV, Calipari said he knew the Rupp family personally, but “is willing to listen to different experiences or opinions other people may have.”

“This is another chance for us to listen and learn,” Calipari said. “Some people agree, some people are not going to agree … I’m all ears, I’m going to listen.”

What are your responsibilities in your role at Chicago State?  My role at Chicago State is vast but I primarily oversee all of the Chicago State athletics external facing units which include communications, marketing, ticketing and sales, corporate sponsorships and fundraising. I also serve as sports administrator for several of our sports and work with […]

What are your responsibilities in the role of Assistant Athletics Director for the J.T. and Margaret Talkington Leadership Academy at Texas Tech?  I am responsible for the oversight of daily operations, programming, special events and budget for our leadership academy across the pillars of career, character, leadership and wellness. In this role, I also serve […]