Making informed decisions during the hiring process is vital for any athletic department. To help with these decisions, universities often consult with the services of a search firm.

Growing in popularity in recent years, search firms assist with selecting coaches, athletic directors and other leadership positions. These firms generally act as a bridge between a vacancy and potential candidates, ensuring a confidential and streamlined process.

Search firms are especially prevalent for particular universities and less so for others. We performed several studies to further understand how search firms impact the landscape of college athletics, particularly with the hiring of athletic directors and college football head coaches. According to our findings, 217 different universities have used a search firm in the hiring of either an athletic director or football head coach since 2008. In total, there have been 25 different firms assisting in these hires, with the bulk of the decisions made by a few prominent entities.

The table below highlights the search firms that have been involved with the most combined hires since 2008, with Parker Executive Search leading the way by a steady margin: 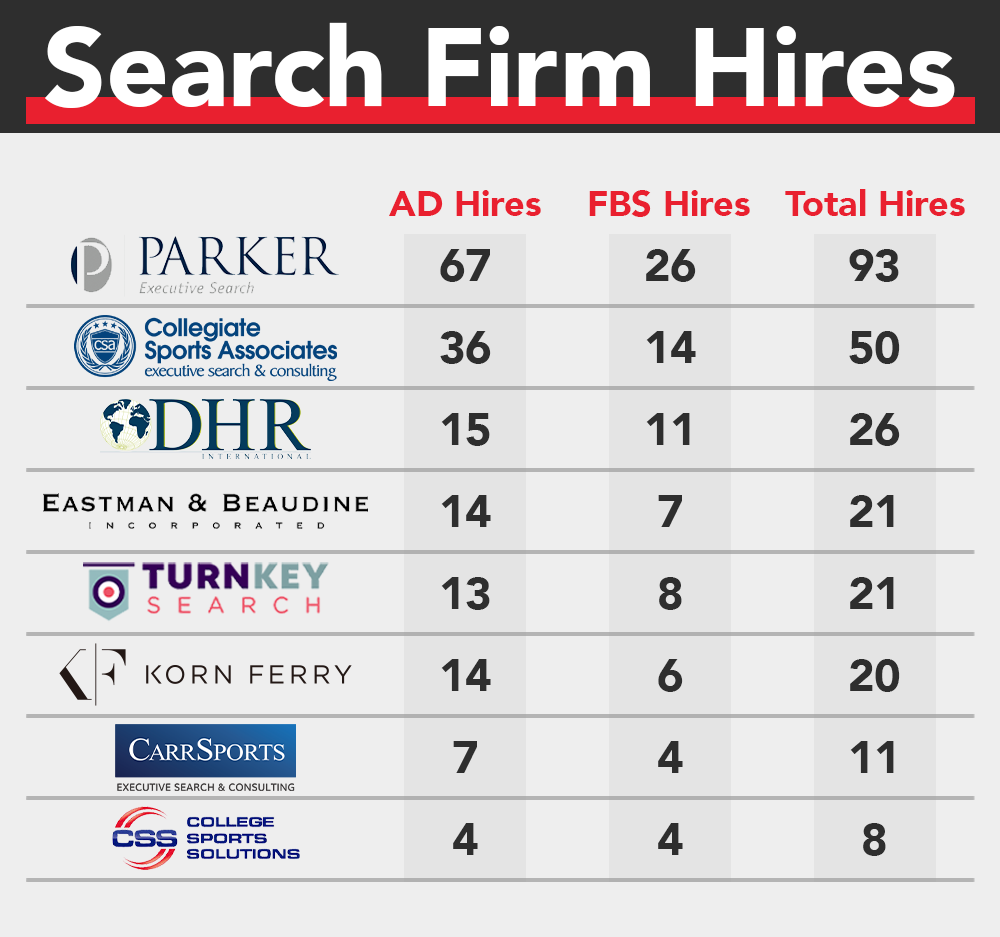 Other firms like Ventura Partners have primarily focused on football coaching hires (6 searches) while Witt/Kieffer has helped mostly with hiring athletic directors (8 searches).

With that in mind, let’s take a look at how search firms compare based on tenure performance. To perform the study below, we found the average tenure rating based on ADU’s Athletic Director Performance Ratings as well as the average tenure winning percentage of football coaches hired prior to this season. These metrics were then tied back to the hires made by the individual firms. 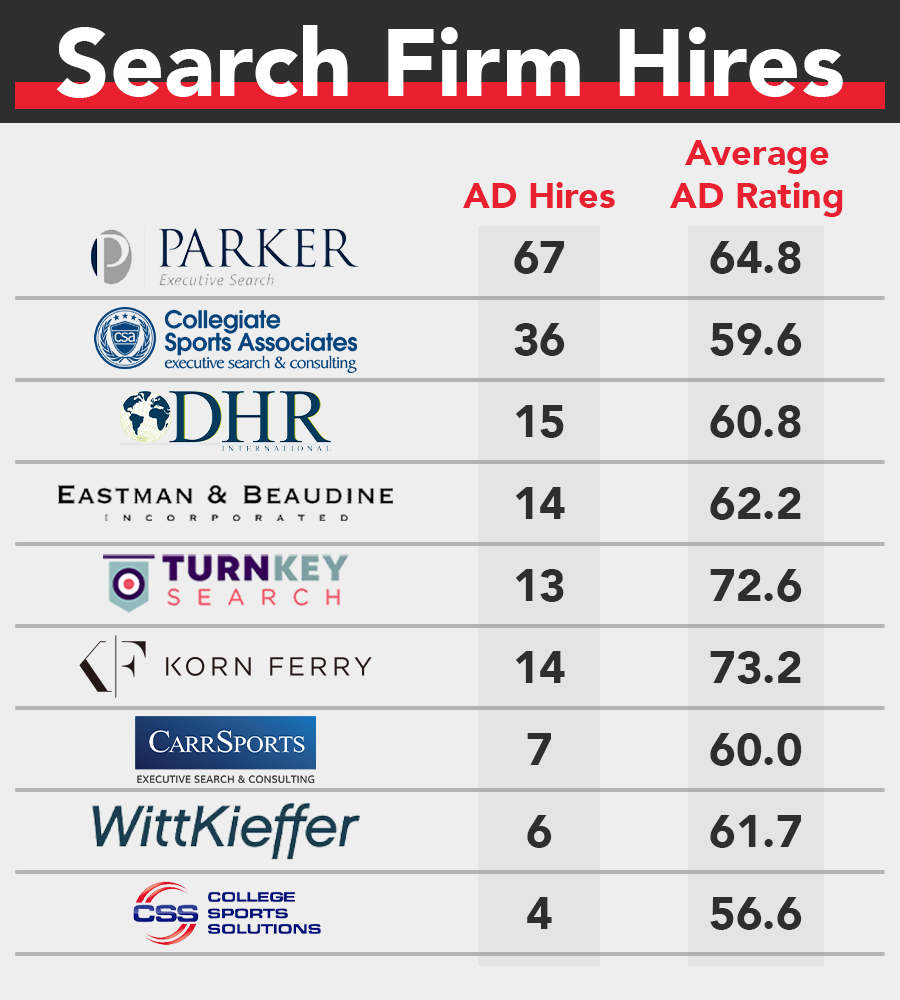 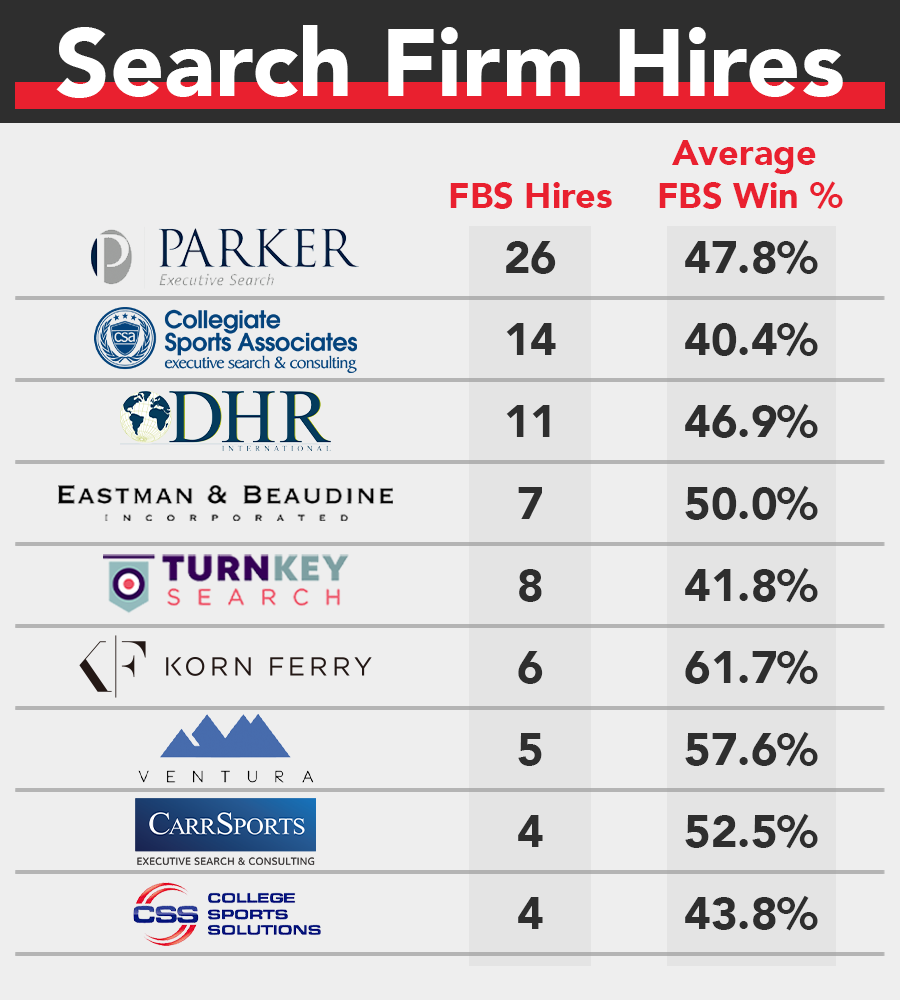 It is worth noting in the above example that Korn Ferry has historically been the most expensive search firm, charging as much as $270,000 for a head coach search, while competitor rates can range between $50,000 – $150,000. The schools that can afford to pay higher search fees also spend more money on their programs in general, including staff salaries and guarantee games, which generally leads to more wins and higher AD ratings. Even then, as the data shows, a search firm’s assistance in coach hires in particular give no guarantees of locating the right leader for a program long term, as evidenced by the fact that three of the coaches mentioned above eventually separated from their institutions.

Below you will find a table that includes 10 of the 20 highest-rated athletic directors from our Athletic Director Performance Rating study who were hired by universities that consulted with a search firm. 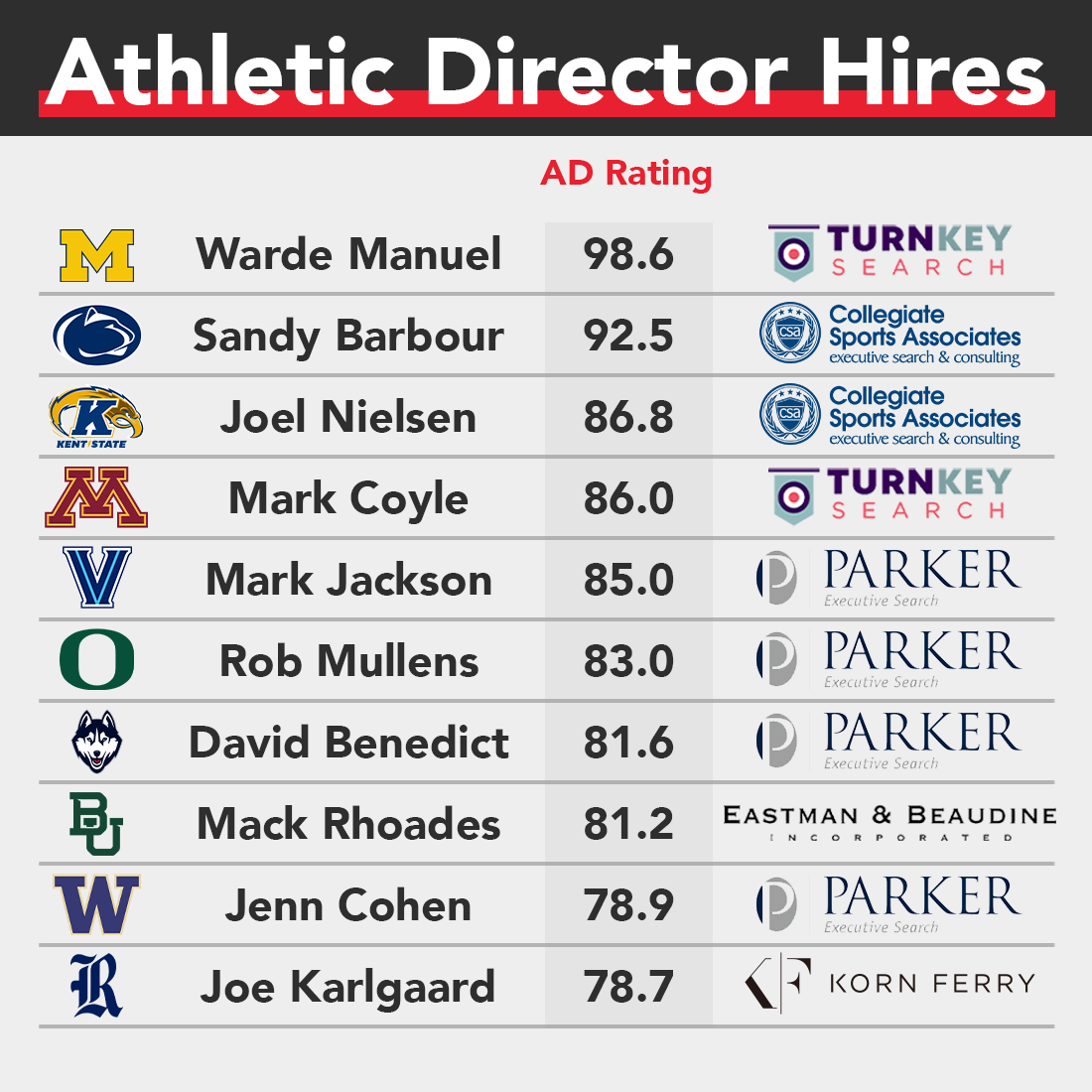 Just how often is a search firm used? The table below breaks down the frequency of search firms in hiring football coaches as well as athletic directors at both the Power-5 level and outside the Power-5. 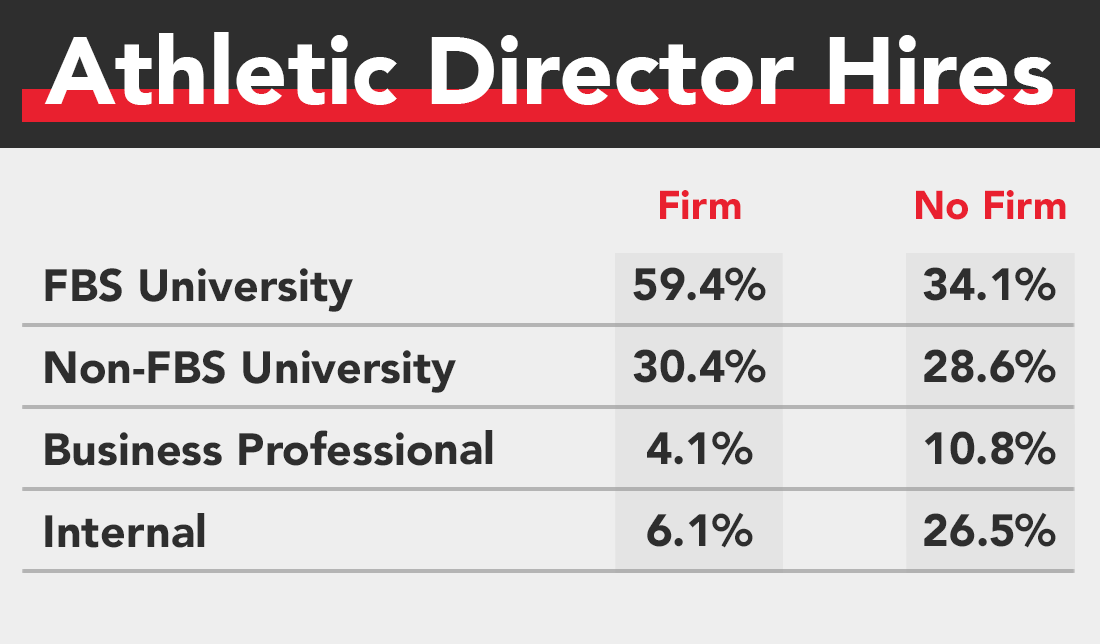 Search firms are nearly twice as likely to help a school select an athletic director who was previously employed by another FBS university. AD searches that proceed without firms, however, are over four times as likely to make an internal hire than when a search firm assists with the hiring process. When a search firm is involved in an AD hire, there is also a slightly increased chance in a female candidate being selected.

University-wide loyalty to a particular search firm isn’t necessarily a common trend. Of the 75 universities that used search firms multiple times in our study, just 26 (34.6 percent) have consulted with the same search firm for their hires. An example of this includes UCF, which consulted with Parker Executive Search in each of its four hires over the years. USF, meanwhile, has consulted with Eastman & Beaudine on three separate occasions.

While a specific search firm — or even the hiring of a search firm at all — doesn’t guarantee athletics success, there are particular firms that have proven track records, as seen above. Properly identifying the needs and goals in a vacancy is paramount to making a hire that can elevate a program.

Here’s the latest college basketball rankings from the AP Top 25 poll, along with NCAA.com’s takeaways.Source