Varsity esports programs are rapidly expanding onto the collegiate scene, but women players are being left behind, according to a North Carolina State University (NCSU) study, “Gender and the Two-Tiered System of Collegiate Esports,” published earlier this month.

While casual, club-level esports teams remain diverse, the study found that varsity-level teams — notably those which are typically well-funded and more likely to offer scholarships and other academic benefits akin to those offered by traditional sports programs — remain “overwhelmingly male-dominated.”

The popularity and professionalization of esports, also known as competitive video gaming, has ballooned into a billion dollar industry in the 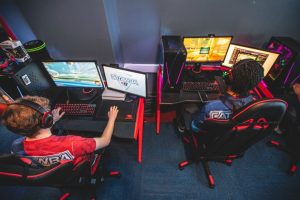 past decade. In response, an increasing number of colleges and universities have developed their own programs, often seeing them as ways to recruit IT- and STEM-oriented students, draw media attention and gain sponsorship. Historically Black colleges and universities (HBCUs) have even jumped on the “esports bandwagon” themselves recently, creating an HBCU league of their own.

But it’s precisely this type of “gold rush,” as one program director called it, that is fueling such gender disparity, argues the study. When seeing programs as “high stake investments,” colleges “are eager to field winning teams,” according to the study. And in the race to create a winning team, the study explains, colleges and universities have often relied on professional esports culture to provide them with top-tier players.

But there’s a problem with that strategy, explains the study’s co-author Dr. Nicholas Taylor, an associate professor of communications at NCSU.

“When you leave it up to esports culture to produce really good players — which is what collegiate varsity programs are doing — then you are letting in all of the cultural conditions that make it really hard for women to participate in the first place,” said Taylor, listing examples such as less access to leisure time, fear of harassment and the long-standing stereotypes between not only gaming and masculinity but computers and masculinity.

“We’re importing the values of professional esports in wholesale, without thinking critically about what those values mean and do in a higher education context,” he added.

The gaming world carries with it a complicated history of misogyny. In 2014, for instance, the “Gamergate” harassment campaign brought to light the toxic environment that women gamers often face when male players collectively target and harass women and non-cismen through doxing, threats of rape and death threats.

In response, diversity and inclusion advocates created the organization AnyKey to improve conditions for women and minorities in competitive gaming. In 2016, as more schools were beginning to implement esports programs, AnyKey published its own white paper offering ways to combat such misogyny on the collegiate level. It’s this white paper that inspired the NCSU study.

Collegiate esports programs “can provide opportunities to consider structural requirements for gender equity, as well as offering opportunities for mentorship and multi-level skills training. Title IX, as well as broader campus commitments to equity, inclusion, and diversity, can provide new initiatives insights and tools to build positive value-driven programs from the ground up,” AnyKey wrote at the time. 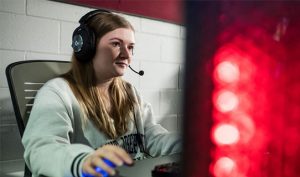 Following the whitepaper’s publication, the study’s authors had hoped to see how colleges and universities “were improving conditions for the recruitment, training and retention of women in collegiate esports.”

“What we got, instead,” the study notes, “was a picture indicating that such efforts are few and far between.”

The qualitative study features interviews with 21 leaders of collegiate esports programs, 8 of whom led varsity-level teams and 13 of whom led club-level teams. In interviewing the two groups, Taylor and his co-researcher Bryce Stout, found “clubs continue to carry out the work of forming esports communities, and are still where we are most likely to find the most diversity [in terms of both skill and background], but varsity programs are where the money’s going.”

When interviewing varsity program leaders, one attributed its lack of women to the fact that few women apply. Yet, the study also found that, of the 21 existing programs, only one made intentional recruitment efforts toward women, despite the fact that women are participating at the club-level and have long shown interest in esports competition.

“Here I think we need to take a broader view of esports and pay attention to the fact that women have always been a part of esports,” said Taylor. “As organizers, as behind the scenes folks, as MCs, they fulfill all sorts of vital roles in esports and have always done that. … It’s not that they’re not interested, it’s that they’re not encouraged and oftentimes actively discouraged from taking those central roles in front of the screens.”

Instead of seeing varsity-level programs focused on acquiring the best players and, thus, recruiting from professional esports, where the culture has made it difficult for women to participate, Taylor said he’d like to see more attention placed on cultivating talented players. He’d also like to see clubs emphasize tolerance and inclusion front and center in their codes of conduct.

“Higher education should be concerned foremost with education and, I would argue, social justice,” said Taylor. “And so, maybe if we worried less about fielding the ‘best’ team and fielding a team that looks like how the culture of the university ought to look like, then maybe we’d be making some headway.”

Until then, the study argues that, “the neo-liberal values of contemporary university administration seem to be winning out over postsecondary education’s historical commitments to cultivating growth and positive social change: the value of esports is precisely in its capacity to improve the university’s brand in a crowded postsecondary marketplace.”

Dr. Marc Williams, who was tapped this summer to lead the esports program at Florida Memorial University, said that the study reinforces the need to engage women early on.

“At Florida Memorial University, we have done our homework,” said Williams. “The data shows that girls who play videogames are three times more likely to choose a STEM related major,” he said, adding that the school’s esports program will be rooted in the STEM disciplines.

“Creating such a program, provides the opportunity to transform Florida Memorial University into one of the leading schools in the nation that provides students the knowledge and skills needed for careers in STEAM-related fields and the videogame industry,” he said.

Jessica Ruf can be reached at jruf@diverseeducation.com

More Than an Athlete: Pivoting to a New Paradigm

Student-athletes all have some level of investment in their particular sport. This investment can come in the form of effort, time, emotions, money, hopes, and dreams. Perhaps the most impactful investment that they make is the investment of their identity. This is the level in which one’s view of their self is defined as being […]