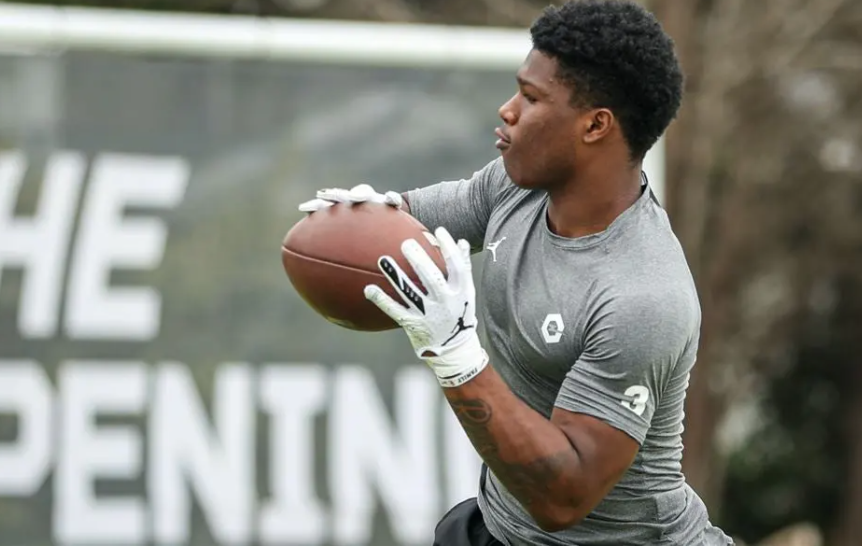 No. 1 Mater Dei (Santa Ana, Calif.) eked out a 21-16 win over No. 10 Centennial (Corona, Calif.) in the CIF-SS semifinals with strong defense and timely offense. And a hurdle from Oklahoma commit Raleek Brown.

Centennial had a 9-7 lead as Mater Dei marched the ball downfield midway through the second quarter. The Monarchs had been unable to gain any real offensive momentum, and they faced the rare challenge of trailing in the second quarter of a football game.

No matter. Brown, a five-star player on the 247Sports Composite who is ranked the No. 2 player in California and the No. 2 running back in the class of 2022, figured out a way to get to the end zone.

It’s as the old childhood song goes: Can’t go through them, gotta go over them.

Brown was determined to get in. No more waiting. He leapt over an opponent.

The referee must have thought that the play was just unreasonably cool, because that flag doesn’t seem necessary from the vantage point of the replay.

Mater Dei took down Centennial and will face Servite (Anaheim, Calif.) for the Southern Section championship.

Brown is one of two five-star players committed to Oklahoma. He and Lakeland (Fla.) High School defensive lineman Gabriel Brownlow-Dindy headline a class that is, as of Saturday morning, ranked No. 2 in the Big 12 and No. 8 in the nation.

With moves like these during prime-time moments, it’s clear why the Sooners are so high on Brown.

US-based esports organisation Spacestation Gaming has teamed up with FPS performance and training platform Aim Lab to enhance its player development structure.  Developed by neuroscientists at Statespace, the platform will offer Spacestation’s coaches, players and its esports community with data and analytics to maximise player performance. RELATED: DarkZero Esports takes a shot at Aim Lab partnership Spacestation will use […]

Brazilian bookmaker BetMais has announced a partnership with esports live-odds provider Oddin.  As a part of the deal, BetMais will integrate Oddin’s iFrame solution into its platform.  Credit: Oddin RELATED: Oddin joins ESIC as anti-corruption supporter Marek Suchar, Head of Partnerships at Oddin, spoke on the partnership in a release: ‘’Brazil is one of the […]