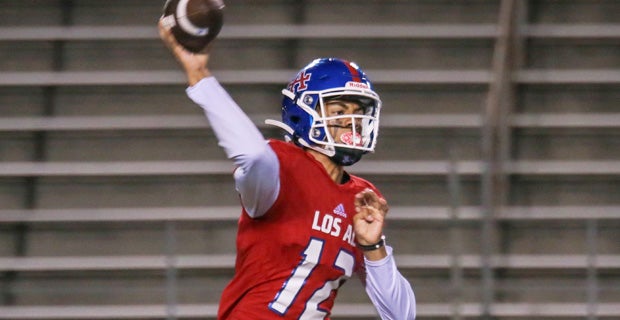 The 2022 high school football season is starting with a bang with the 2022 ESPN GEICO Kickoff.

ESPN announced its doozy of a Kickoff field on Tuesday, with a doubleheader of St. Joseph’s Prep (Pa.) vs. St. Thomas Aquinas (Fla.) followed by Los Alamitos (Calif.) vs. American Heritage (Fla.) on Aug. 27.

American Heritage’s meeting with Los Alamitos might be the juiciest matchup of the Kickoff. Los Alamitos is led by five-star USC quarterback commit Malachi Nelson — the No. 2 recruit in the class of 2023 — and five-star athlete Makai Lemon, who is also committed to the Trojans. Los Alamitos also has four-star wide receiver DeAndre Moore Jr., three-star athlete Ethan O’Connor, three-star defensive end Sinn Brennan and three-star running back Nygel Osborne.

American Heritage welcomes a new head coach in Mike Smith after Patrick Surtain joined the Miami Dolphins’ coaching staff. Smith was previously the program’s strength and conditioning coach and takes over after a stretch that featured a 111-18 record since 2012 and state championships in 2013, 2014, 2016, 2017 and 2020.

There are also a pair of heavyweight matchups outside of the Kickoff during the first weekend of the 2022 season. Defending national champion Mater Dei (Calif.) travels to Las Vegas to take on Nevada 5A champion Bishop Gorman, while St. John Bosco heads to Texas for a date with Allen.

North American esports organisation TSM has renewed and extended its ongoing technology partnership with Lenovo. As part of the partnership, Lenovo Legion continues as the exclusive PC partner of TSM’s teams and organization, named TSM for competing in Riot Games titles and TSM FTX for all other games, respectively. Lenovo is also now the exclusive […]

Five finalists have been named for the 2021 Karl Malone award, given to the best power forward in the country.Source