Dr. Catana Starks, a Tennessee State University golf coach and alumna, died on Sunday at the age of 75. She leaves behind a legacy of being the first African American woman to coach an all-men’s team at the collegiate level, reports WMC5 News.

Starks coached the TSU men’s golf team from 1986 to 2005, leading the team to a National Minority Golf Championship, where the Tigers 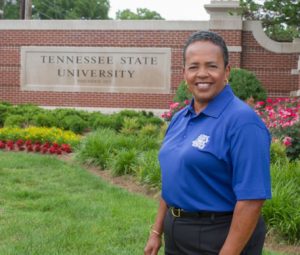 shot a record-setting 840. During her time at TSU, she guided several players toward success, including Sean Foley, who was later a swing coach for Tiger Woods; Sam Puryear, who later became the first African American men’s head golf coach in any major conference; and Robert Dinwiddle, an all-American who later played on the European professional tour.

“She was a true advocate and believer in the term student-athlete,” Puryear said. “She helped make me a better student, athlete, and now coach. I am paying a lot of her messages and lessons forward.”

Holding a doctoral degree, Starks also taught and was the department head of Human Performance and Sports Sciences at TSU.

“Our hearts are saddened by the passing of Dr. Catana Starks,” said Dr. Glenda Glover, president of TSU. “She was a trailblazer, a true champion, whose legacy will continue in all those she inspired, on and off the golf course. Dr. Starks epitomized the excellence that TSU strives to instill in all its students. The thoughts and prayers of the entire TSU family are with her family and loved ones.”

In 2011, Starks’ trailblazing story inspired the film “From the Rough.”

“She was a very humble woman, who was very reluctant to talk about her many accomplishments,” said Michael Critelli, one of the movie’s producers, according to WMC5. “One of the of the biggest challenges I had constructing her life story for the film was that she would not brag about what she had done. I would have to find out about her achievements from other people.”

As it stands, student-athletes — “amateur athletes” — participating in NCAA-affiliated sports cannot earn money from their name, image and likeness (NIL). They risk losing eligibility if they attempt to monetize their brands. This issue, although longstanding, is again coming to a head as the NCAA is and will be facing more opposition to its […]