It’s imperative to note the Athletic Department Power Index is not intended or developed to analyze the performance or potential of the current Athletic Director at the respective institutions.  Rather, it is an assessment of the opportunity generally through the eyes of both peers and aspirants to the position were it to become available.

Dozens of sitting Athletic Directors or executive-level administrators who currently are or could soon be a Southeastern Conference AD were invited to share feedback on each AD job in the league.  The data was used to provide detailed insights about the potential for success at each school.

The nine variables independently measured and utilized to determine the rankings include:

To view full results for every survey question, please visit the Athlete Viewpoint portal or scroll down for a recap.

Overall rankings, graded on a scale of seven as ‘much better much better likelihood of success than peers’ & one as ‘much worse’: 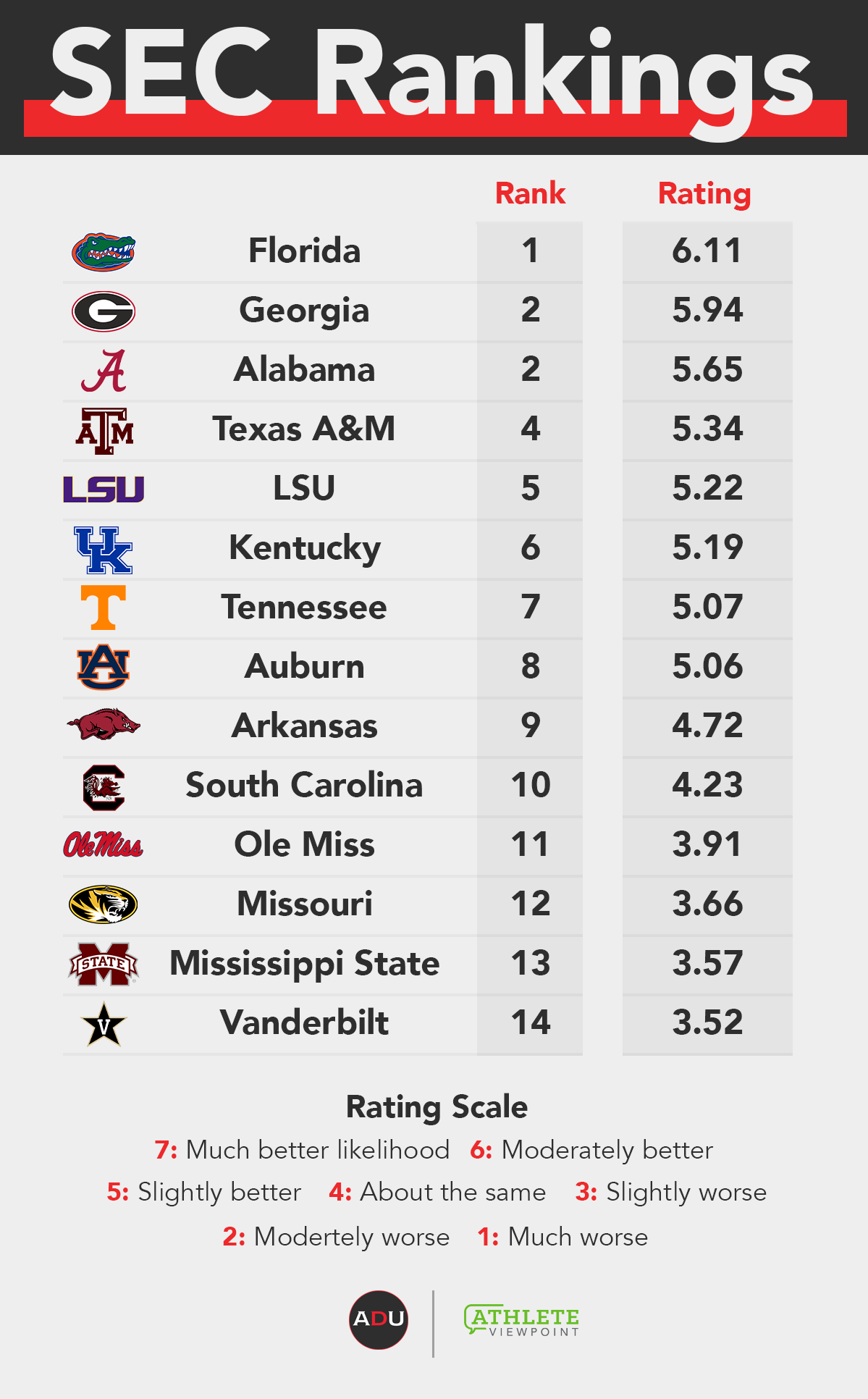 Here are the full category by category ranking results: 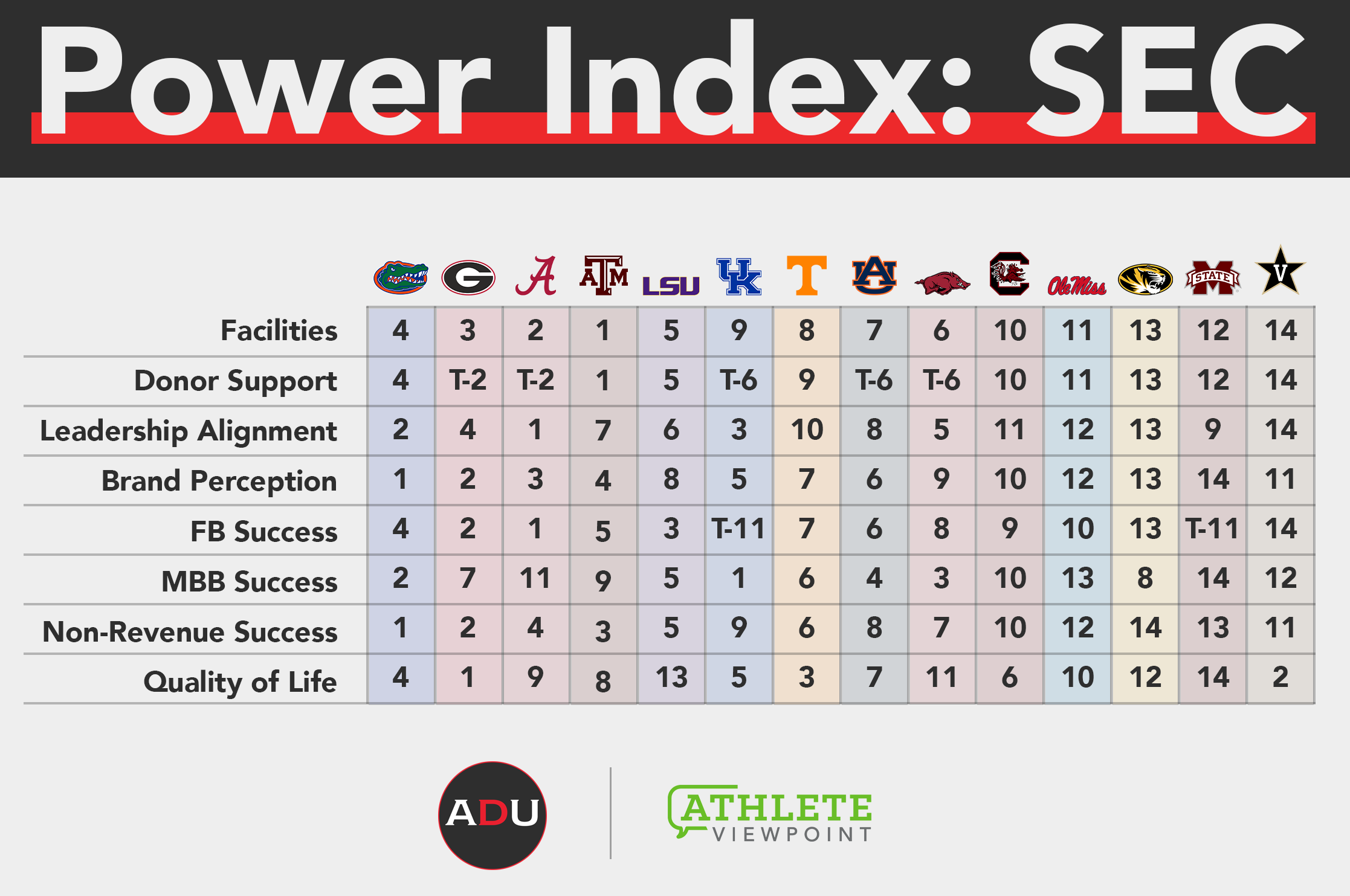 The SEC’s football profile has been top tier with seven College Football Playoff appearances, the most of any league. Here’s how survey respondents view the potential of each football program in the league (graded on a scale of seven as ‘much better than peers’ & one as ‘much worse’): 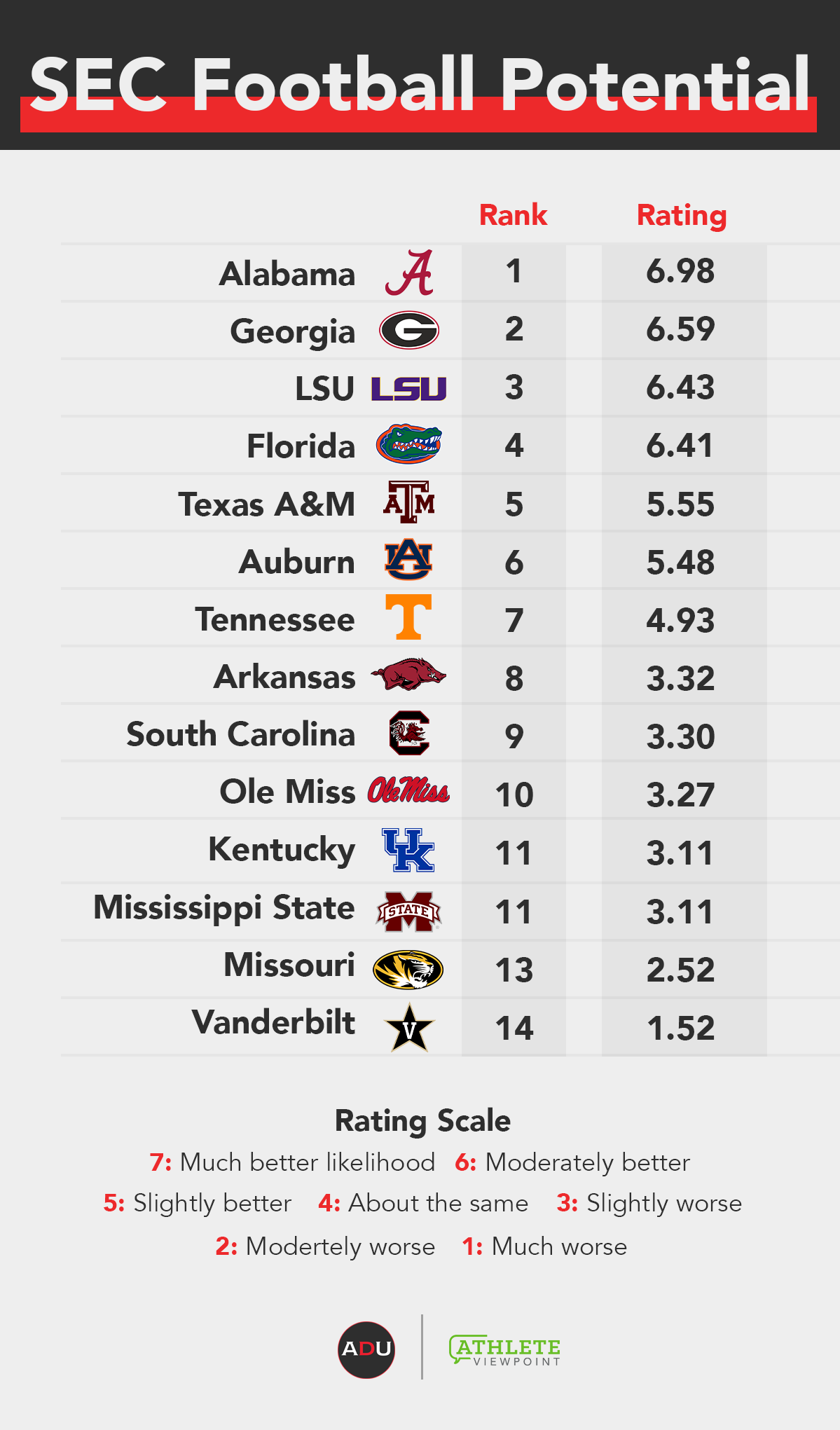 Since 2010, Kentucky has won six conference tournaments, six regular season titles, and qualified for all but one NCAA Tournament. Here’s how survey respondents view the potential of each men’s basketball program in the league (graded on a scale of seven as ‘much better than peers’ & one as ‘much worse’): 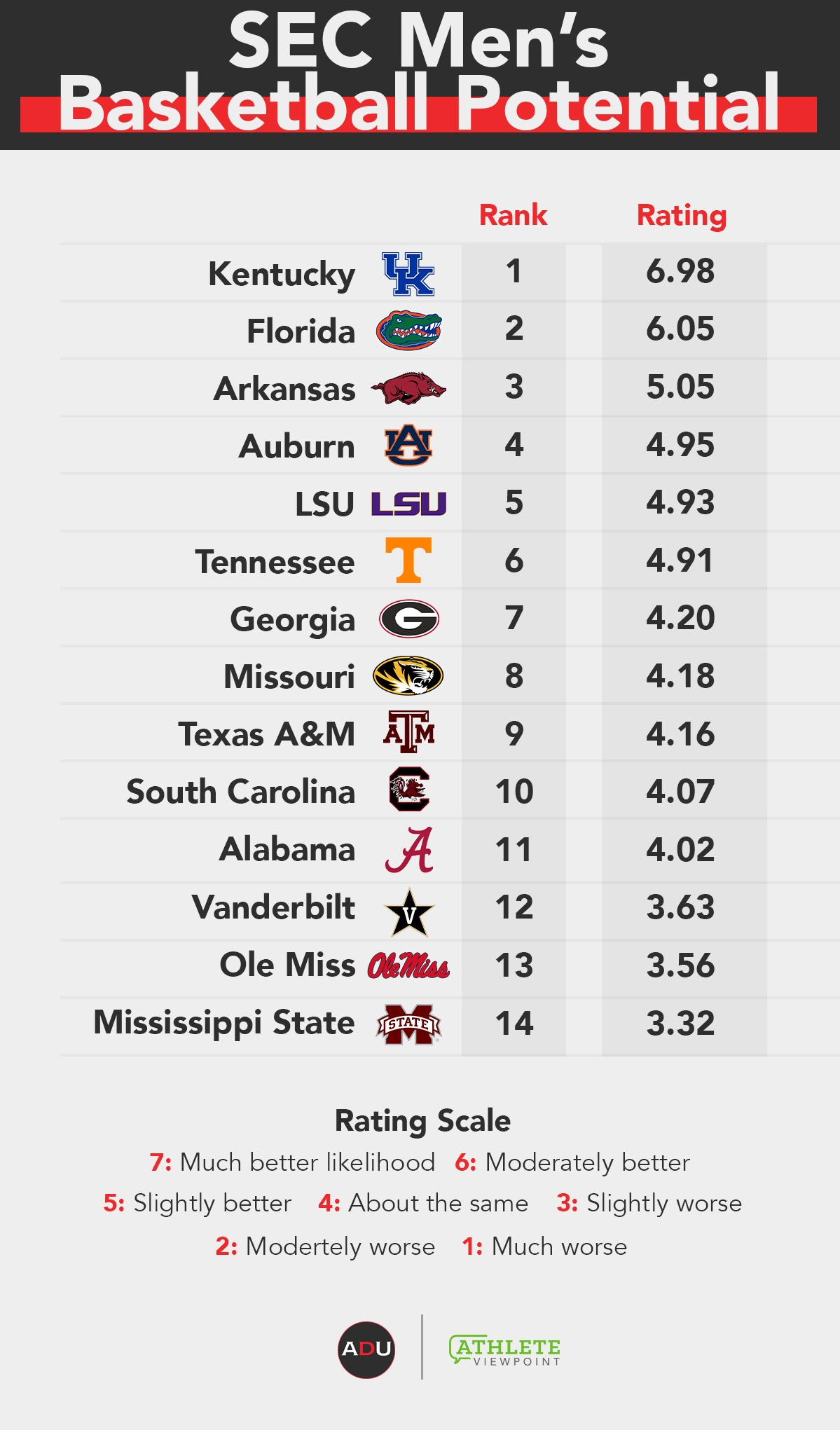 Since the inception of the overall SEC All-Sports Trophy for both men’s and women’s sports in 1983-84, Florida has won 28 SEC All-Sports Trophies. Here’s how survey respondents view the potential of each member’s non-revenue sports (graded on a scale of seven as ‘much better than peers’ & one as ‘much worse’): 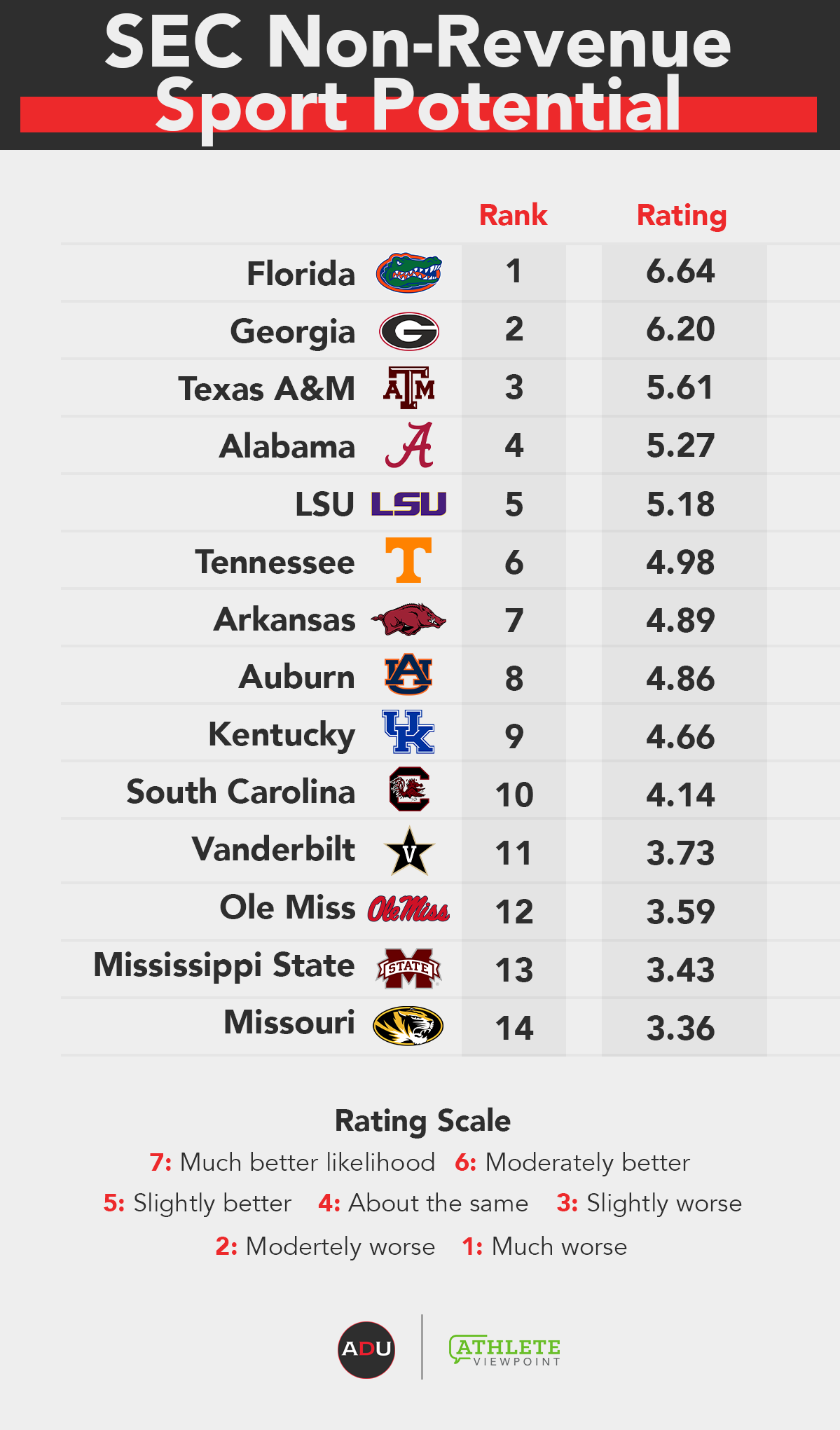 This Athletic Department Power Index intends to review all Division I conferences in the coming months. As was the case with previous conferences covered, selected individuals will be invited to participate and share their views about specific conferences and the subsequent data will be shared in a similar manner.  The technical expertise, survey development, survey distribution and data visualization are provided by Athlete Viewpoint.

Esports live-odds provider Oddin has partnered with Polish bookmaker BetX to introduce its new esports iFrame solution. The vision of both companies is to provide the most entertaining live esports betting experience, with Polish users now having the opportunity to engage with an esports betting solution that ‘understands their needs’, according to a release. Credit: BetX […]