We reviewed all forms of compensation for the head baseball coaches at National Collegiate Athletic Association member institutions of the Atlantic Coast, Big Ten, Big 12, Pac-12 and Southeastern Conferences (the, “Autonomy 5”). We analyzed these coaches’ employment agreements and related documents, which were obtained in partnership with USAToday, and created a sortable database of primary compensation.

Click here to view the database and here to review a short description of our methodology for calculating the amounts shown therein.

In conjunction with this analysis, we researched and considered applicable biographical and performance data. And from this aggregate analysis we respectfully submit a summary of our findings in Section II.  Section III includes a summary of an individual coach’s employment agreement, which is a representative example of the fundamental economic terms of an Autonomy 5 head baseball coach’s employment agreement. And Section IV offers observations and reasonable explanations for salary discrepancies between college head baseball coaches and Major League Baseball Managers. 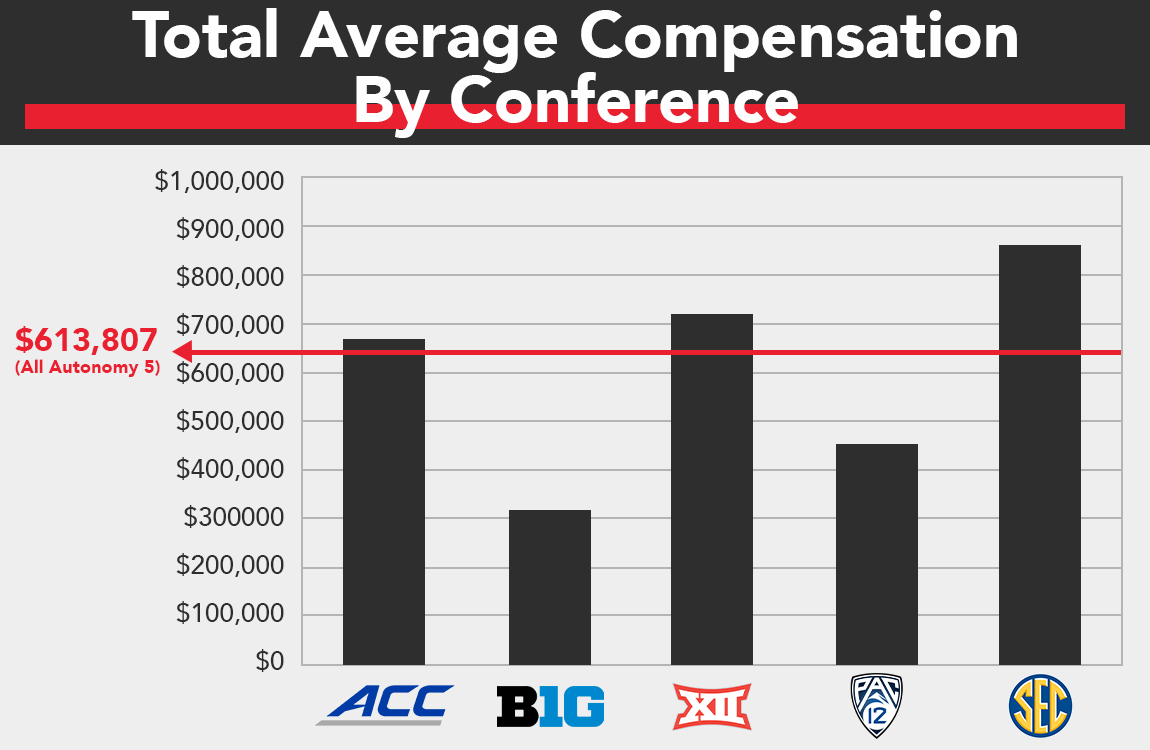 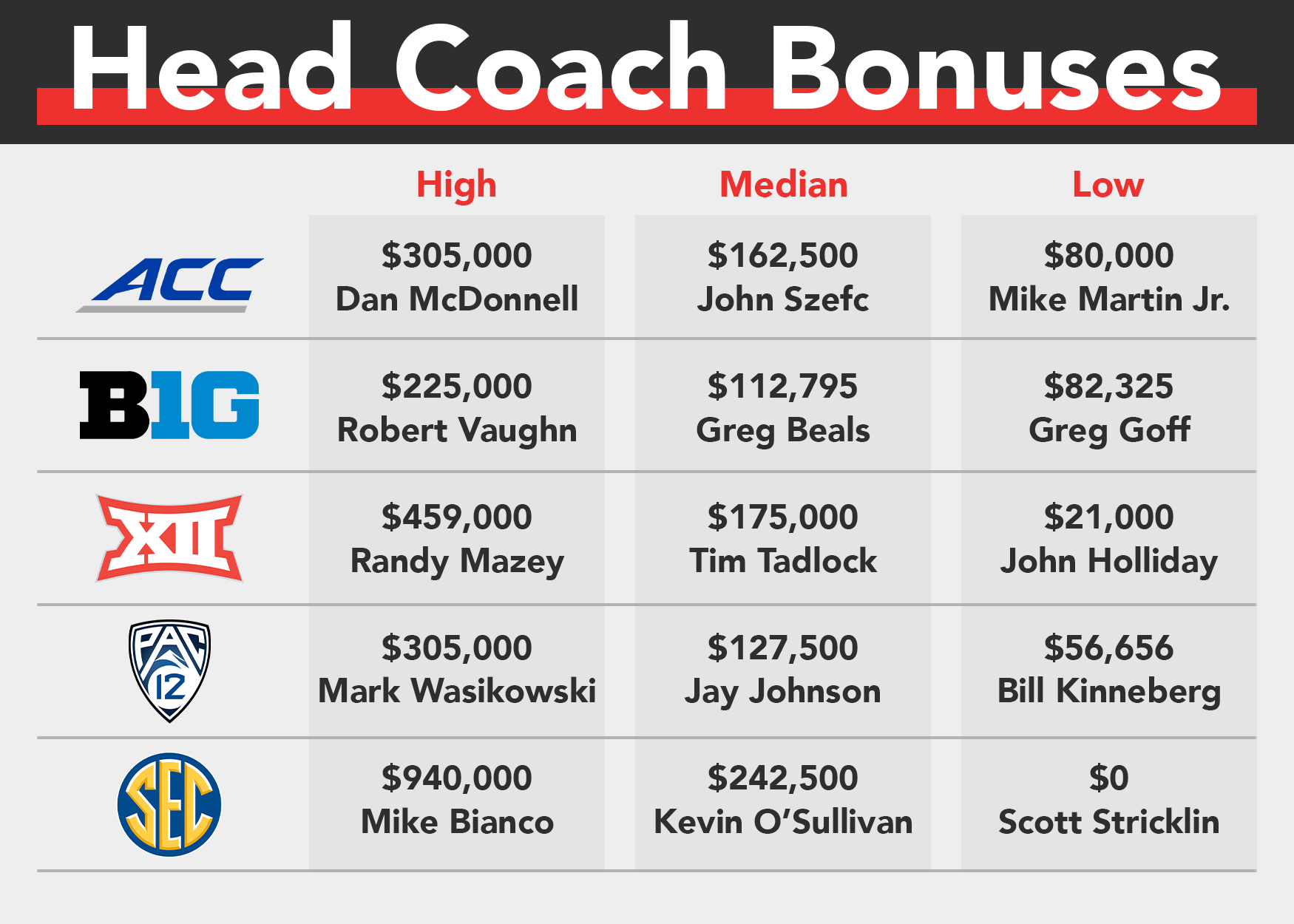 The following chart depicts the Term and Tenure of the cohort’s employment agreements with their current university. For example, consider a coach who was hired on July 1, 2010 and who on July 1, 2016 received an extension of his then current employment agreement until June 30, 2021. For our purposes, the Term of that coach’s contract is 5 years (the duration of the current extension) and his tenure is 10 years (July 1, 2010-June 30, 2020). 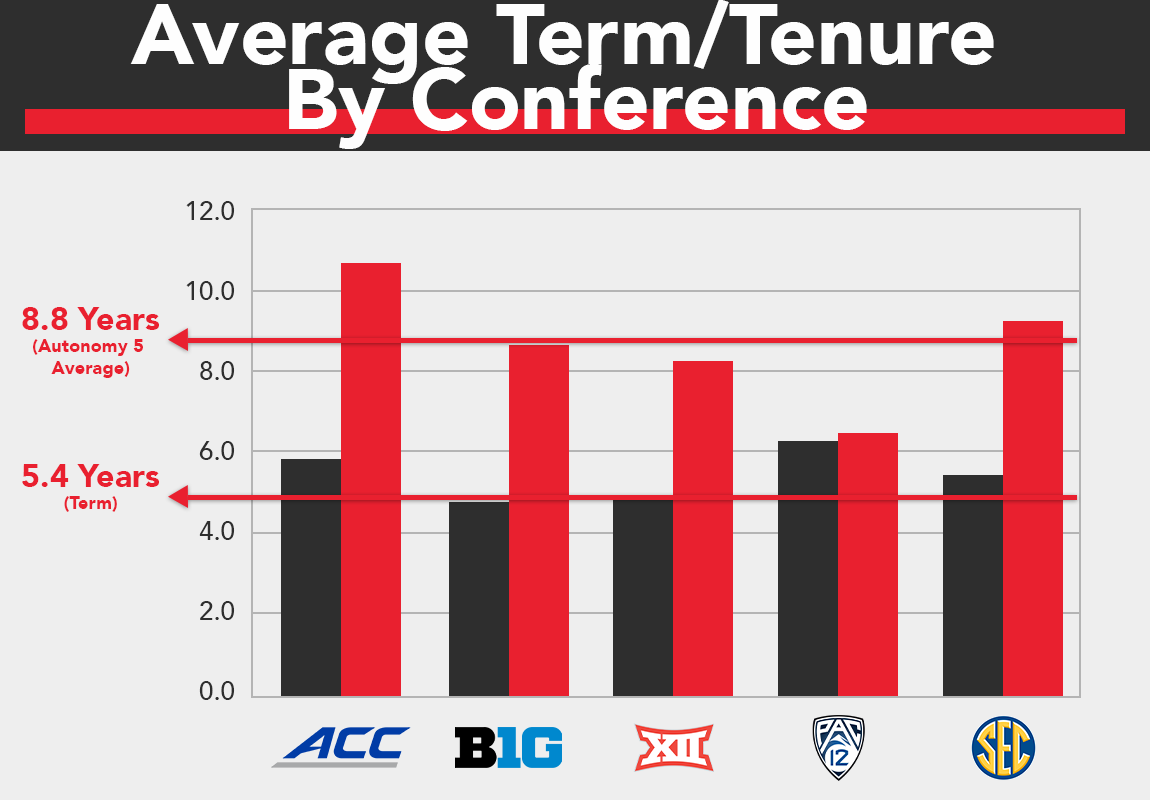 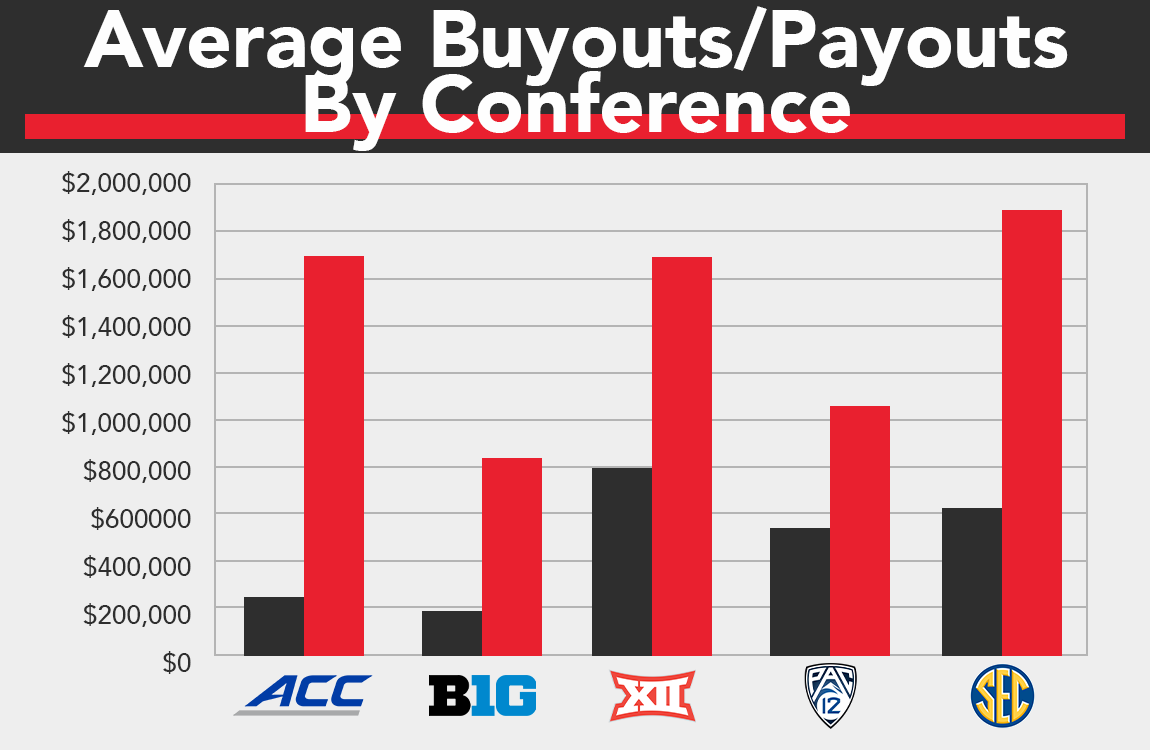 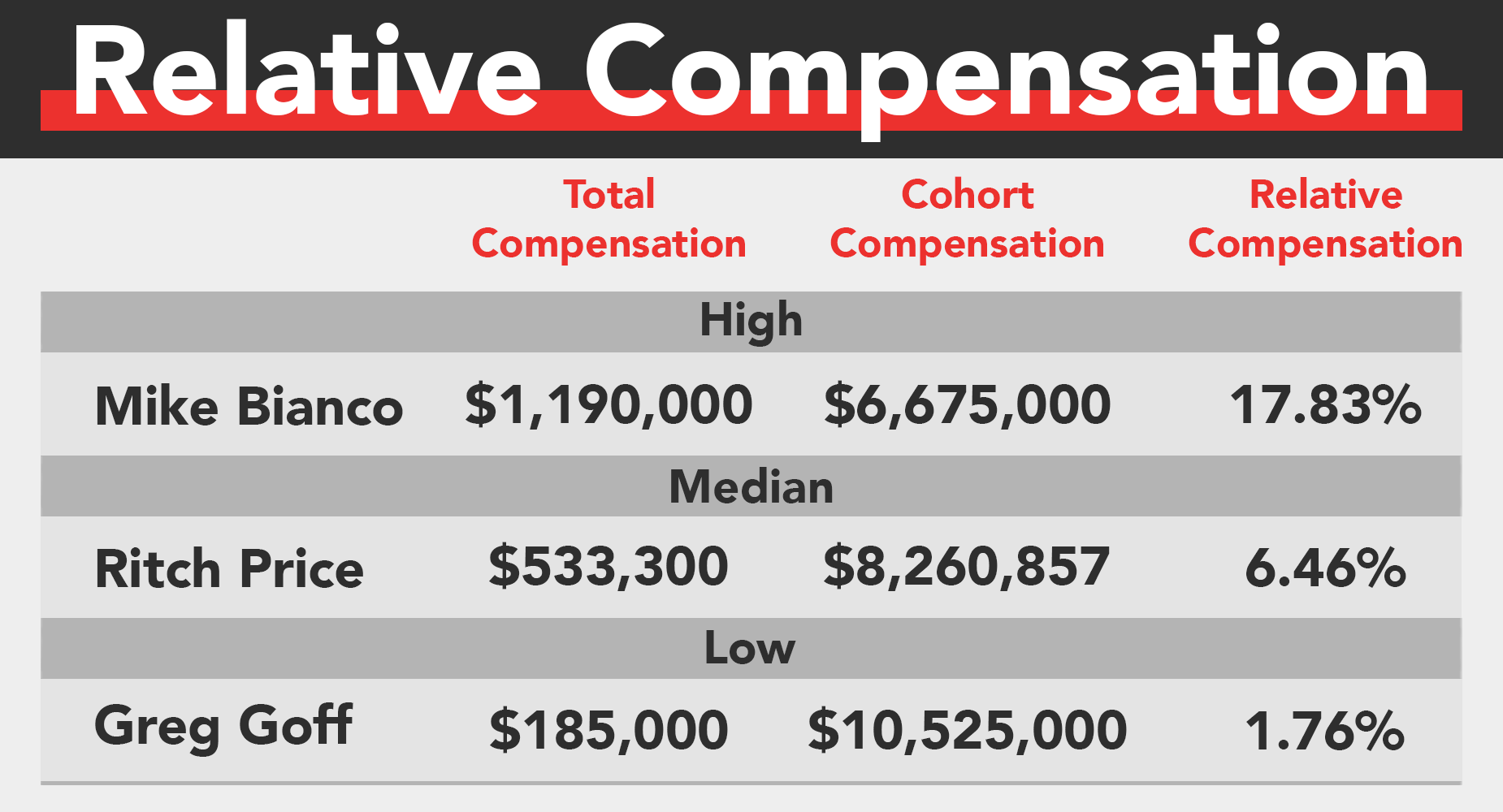 Coach Bieser’s Employment Agreement is representative of the sources of income Autonomy 5 baseball coaches receive as well as the fairly standard conditions and contingencies upon which their employment agreements provide for pay incentives and/or term extensions.  To obtain copies of executive summaries of the employment agreements for this entire cohort, please click here.

Our research indicates that collegiate baseball coach compensation packages have steadily increased in total value over the last several years. Based on our calculations, the average total compensation for an Autonomy 5 baseball coach in 2017-2018 was ~$437,000, and in 2019-2020 it was ~$589,000. In comparison, compensation packages of managers in Major League Baseball (“MLB”) have steadily decreased over a similar period, leading industry leaders to contemplate the reasoning behind such discrepancy. In contrast, compensation packages for collegiate football and men’s basketball coaches have held their value in comparison to compensation packages among their peers in the National Football League (“NFL”) and National Basketball Association (“NBA”), respectively. Nevertheless, there are several factors to consider which may provide an explanation for such discrepancy, and also factors that might prove to be indicators of a potential industry trend moving forward.1

In analyzing the disparity in compensation trends between collegiate baseball coaches and major league managers, one explanation for the discrepancy could be the skillsets and responsibilities required by coaches at each respective level. MLB managers’ responsibilities primarily center upon in-game decision making, as well as interpersonal roster management between team personalities and media relations skillsets, as MLB managers are mandated to conduct two media sessions per day on game days. Further, in strictly scrutinizing where a manager might provide a competitive advantage to their team, as well as where a manager is able to exert their influence on a game, it primarily comes in the form in-game decision making such as when a manager uses their best reliever and optimal lineup usage.2 As the MLB power structure between front offices and coaching staffs continues to evolve, as noted below, many such in-game decisions are being guided by front offices, thereby shifting where decision making value is derived within an organization.

Comparatively, one explanation as to why collegiate baseball coaches’ compensation packages have held their value in comparison to their MLB peers is the competitive advantage each respective coach is able to provide in the recruiting landscape. A clear delineation between the collegiate and professional model is roster construction, primarily in the form of recruiting versus the draft and free agency in the professional ranks. In the college landscape, recruits are often drawn to institutional stability and infrastructure in the form of a coach or facilities. Alternatively, in the professional space, many front offices manage the free agent recruitment process, which is a stark contrast from how the collegiate recruitment process is managed. Moreover, as evidenced by recent MLB free agency trends, many front offices are placing greater value on acquiring players via the amateur draft and trades rather than free agency, thus, in an indirect manner, minimizing the impact that a manager might have on a free agent’s selection.3 Thus, in comparing the two model’s, collegiate baseball coaches exercise far greater influence in talent acquisition and roster construction than their MLB peers, and, as such, provide an explanation for their compensation packages holding their value over the long-term.

Another potential explanation as to why collegiate baseball coach compensation packages have increased, while MLB manager compensation packages have diminished in value over the same period, could be explained by the scrutiny placed by win-now settings in college and professional football and men’s basketball as compared to that of college baseball and MLB. With the revenue generated from football and men’s basketball exceeding that derived from baseball in most cases, such revenue figures are often indicators of fan attention and scrutiny. Accordingly, collegiate baseball fan bases do not drive organizational change in the same manner that such scrutiny and attention do in the sports of football and men’s basketball.4 Consequently, this consideration, coupled with the value that a long-tenured coach might be able to provide in the recruiting landscape, provide an additional explanation as to why the value of collegiate baseball coach compensation packages has steadily increased.

In addition to the above considerations, and as referenced above, one of the primary differentiators as to why collegiate baseball coach compensation has increased, while the MLB manager compensation structure has decreased over the same period, could be attributed to the shift in organizational structure in the professional model.5  Over the last several years, the MLB model has showcased the influence that analytics departments and front offices may have on in-game decision making by managers.6 Comparatively, no such power struggle exists in the collegiate space, as coaching staffs often times manage the information that is relied upon to make in-game decisions, while also not having oversight from administrators who have a detailed knowledge of the subject matter like those of their front office counterparts in the professional space. The point is further driven by the comparison that in the professional ranks, MLB front offices are focused on the nuanced details of one sport, whereas collegiate athletic administrators are focused on a myriad of issues as they pertain to a plethora of sports. Collectively, these considerations shift the power dynamic and flow of information in favor of the coach, rather than administration, and accordingly creates value for collegiate baseball coaches that their professional peers are unable to derive.

As evidenced by the above points, collegiate baseball coaches and their compensation packages have held their value over the last several years, and barring a major industry shift, are likely to hold their value moving forward. Nevertheless, one potential shift that could have an impact on industry trends would be athletic departments taking greater control of analytics departments, and the manner in which in-game decisions are made. For example, currently, many athletic departments either allow their respective sport programs to house their analytics initiatives, or have a centralized analytics group providing advisory and informative information to their coaching staffs, that is not binding on decision making. However, one potential shift that could alter the power dynamic between coaches and administrators, and by association, compensation packages, would be greater influence on decision making by centralized analytics groups within athletic departments. Such a shift would not only alter how information is managed, allowing for continuity when coaching changes occur, but would also be accompanied by several administrative hurdles as to how sports are managed by their respective administrators. Overall, while such an industry shift would mirror the professional model, there are several issues that would need to be addressed to facilitate such an industry shift.

Italian football club Inter Milan has unveiled its FIFA 21 roster thanks to a new partnership with Dutch esports agency Bundled. As a result of the partnership, Bundled will assist Inter eSports in a number of areas including content creation and player management. Credit: Inter Milan RELATED: Inter Milan enters esports with QLASH partnership Inter Milan first […]

What is March Madness: The NCAA tournament explained

Here is everything (really!) you might want to know about March Madness — one of the biggest, most exciting and fun events in sports. Source

ESI illustration: GRID/Shutterstock By design, everything in esports is measured. It has to be for game engines to do their job. Complicated formulas compute hundreds of variables in milliseconds to determine the results of player actions. Quantified laws dictate what works and what doesn’t. As a result, game engines must track fountains of granular information. […]